Why We Do It: The Penitential Rite

At the beginning of Mass -- right out of the gate -- we publicly recall our sinfulness. You’d think we’d shine a spotlight on the Lord with a big hymn of praise such as the Gloria, or make a defining statement about our beliefs such as in the Creed. 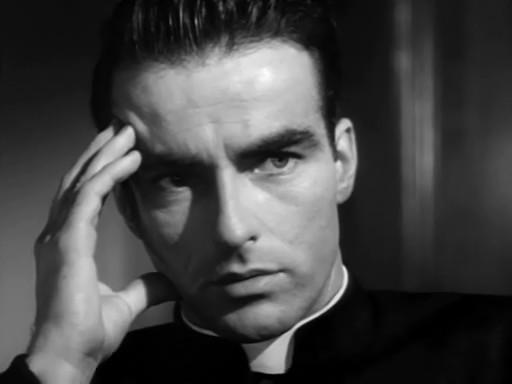 Montgomery Clift in the movie "I Confess."

Instead we prepare to encounter God in Scripture and the Eucharist by shining a light on ourselves and acknowledging our sinfulness. This is the Penitential Rite.

It wasn’t always so. We find the first mention of the Confiteor (“I confess to almighty God …”) as a part of Mass in the year 1100. But where was it for the thousand or so years before then?

In the sermon on the mount, Jesus calls us to reconciliation before offering sacrifice, and the Didache, a 2nd century catechism, directs the congregation to confess its transgressions before breaking bread together.

The Penitential rite’s earliest form was said privately in the sacristy by the priest celebrant before Mass. By the 10th century in Rome, the Pope began Mass by bowing at the altar and praying to God to forgive his sins. This practice spread outside of Rome and was later adopted by ministers before they distributed the Eucharist. Still, the prayer was said privately. By the end of the Middle Ages, the Confiteor took on a form we’re familiar with.

Today’s Penitential rite was introduced after the Second Vatican Council. The Church wrestled with its position within Mass, how often it should be used, and if it should exist in Mass at all. It looked to Scripture and tradition to give us the time and form we have today.

Our Penitential Rite has several parts and options. It always begins with the priest inviting us to recall our transgressions, after which we reflect silently for a few moments. We then proclaim our sinfulness.

The go-to prayer here is often the Confiteor, in which we ask the Blessed Virgin Mary, the angels and saints, and each other to pray for us. Revisions to the prayer in 2010 restored “through my fault, through my fault, through my most grievous fault” found in the Latin original, and during these words we strike our breast around where our heart lies. The priest or deacon may also add the Kyrie (“Lord have mercy …”) after.

The second option is a formula we hear less often: "Lord, we have sinned against you … show us your mercy and love and grant us your salvation." The third option is saying the Kyrie alone.

In all cases the priest concludes with a short prayer of absolution asking for God’s mercy. This prayer does not have the efficacy of the sacrament of Reconciliation.

The Penitential rite is a time for reflection that expresses our desire for and commitment to conversion as individuals and as a community. Like the Gloria or the Creed, it’s a bright spotlight that we shine on the Lord, though in this case we express our faith in God who is loving, kind and merciful. For that we sing with great joy: Glory to God in the highest!

This originally appeared in the Church of St. Monica's weekly bulletin.