No Place for Rambo

If a boy and a skunk can meet nose-to-nose and go their separate ways instead of turning to a Rambo or mephitic spray-down for help, there’s hope that we can do the same. 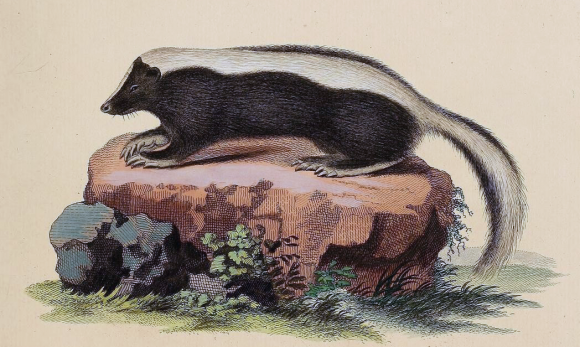 Normally we smell skunks. This time the skunk smelled me.

I can’t tell you what this skunk was looking for. I wouldn’t sneak up on a sleeping skunk in the middle of the night and smell its face. That’s what it did to me.

I was camping with my good friend, Vincent, in Croton Point Park on the Hudson River. We were two kids from the suburbs looking for adventure. Croton Point was the only park in the county that allowed camping. It may have been a manicured campground to most people, but it was wilderness to us.

We came prepared as if we were Lewis and Clark. Vincent brought a menacing looking knife we called “Rambo” because it resembled the blade Stallone brandished in First Blood. I brought enough mac-and-cheese to keep us fat and happy through winter. It was August.

We didn’t stray far from the campsite and talked away the afternoon, mostly about Rambo and his many features. Rambo was more than a blade. He had a hidden compartment stuffed with such survival gear as strike-anywhere matches, needle and thread, mini-compass, basic fishing tackle, and whistle. Rambo was a badass, and he defeated every enemy we dreamed up. We were sure there was nothing Rambo couldn’t handle.

We hadn’t considered a skunk.

The afternoon waned, night came and a campfire with it. We ate our ration of mac-and-cheese while the fire burned down to coals. The mostly full moon rose and brightened the campground. When we ran out of things to talk about we went to sleep. Except for Rambo; Rambo didn’t need sleep.

The night was warm. We slept with the tent door open to let the air in and the screen closed to keep the bugs out. Our heads rested next to the screen.

I woke up during the night to the sound of an animal sniffing me. I thought: Who let their dog loose around the campground? I raised my head to chase the dog away.

It wasn’t a dog. The critter had two little eyes, triangular head and bouffant-shaped body, all black and topped with a long white stripe. We were nose-to-nose with only a paper-thin membrane of no-see-um netting between us, so close that I felt its damp breath puff against my face.

The skunk was as surprised to see me as I was to see him. We both froze, waiting for the other to make the first move.

I knew that the skunk’s first move -- its only move -- was a knockout punch. Skunks come preloaded for mayhem. They are four-legged tear-gas canisters filled with thiol-laden musk. Their noxious stink is feared by man and beast alike. Get sprayed and there’s no soap that will make that smell right. The best course is to prepare for loneliness. When you smell like skunk, friends, lovers and enemies are all hard to find.

Speaking of friends, Vincent was asleep and the invincible Rambo -- whose mission was to protect us from woodland bandits like this -- was MIA. They could not help. Cornered in a tent and effectively alone, I had to find a way to de-escalate the situation.

There was only one thing I could do: Nothing. I put my head down and went back to sleep. The skunk left.

Before we met, I was afraid that every skunk ever made was primed to spray me, in fact that wild things were a threat to anyone who walked in the woods. But when staring into this little critter’s eyes I saw my fear in him. I hoped he wouldn’t attack. He hoped I wouldn’t either.

I’ve since had animal encounters in places more wild than a county campground. At points between Maine’s Hundred Mile Wilderness and Tennessee’s Smoky Mountains, I’ve dodged a squirrel throwing another squirrel at me, walked close enough to rattlesnakes to take amazing pictures of angry rattlesnakes, sidestepped a moose lunching on maple trees, was courted by a porcupine looking for love, and yielded the trail to every black bear that crossed my path. Any of these run-ins could have ended badly for either party. I knew better and none of them did.

We are a divided country. Race, immigration, gun control, whatever -- pick a position and the pushback from the other side feels like the opening volley in a tribal war.

Our conflicts don’t have to end badly. How do I know?

If a boy and a skunk can meet nose-to-nose and go their separate ways without turning to a Rambo or mephitic spray-down for help, there’s hope that we can do the same.