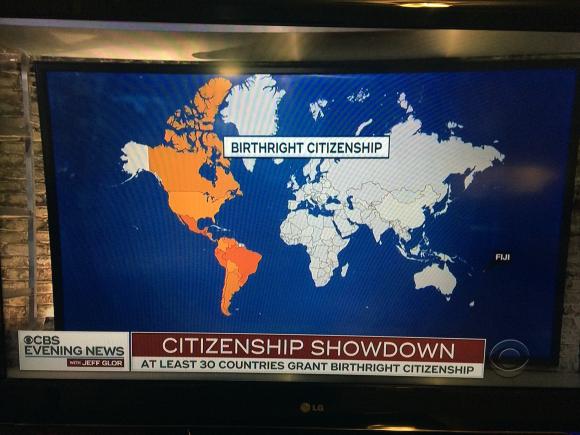 Is the flag missing a star, too?

On October 30, The CBS Evening News with Jeff Glor fact-checked President Trump’s declaration that the U.S. is “the only country in the world where a person comes in and has a baby, and the baby is essentially a citizen of the United States.”

A two-and-a-half minute report told us he was wrong (the number is precisely “at least 30”). To be sure, Mr. Glor needed to put a bow on it:

Here is a deeper look, by the way, at birthright citizenship. It is, in addition to the U.S., the law in Canada and most countries in Central and South America …

Evidently Mr. Glor didn’t look deep enough. On a map highlighting birthright citizenship countries, they neglected to include Alaska as a U.S. state.

(By the way, this isn’t the first time they got their geography wrong.)

Hey, CBS, you're not a fan of the president. I get it. But please, if you’re going to challenge him on the facts, get your facts straight first. (Two wrongs don't make a right, right?)