The "Death" of Lennay Kekua

It's going to take some time to unravel the truth about what star Notre Dame linebacker Manti Te'o knew when. One thing's for sure: The press ran with the story without ever checking the first of the Five Ws -- who. 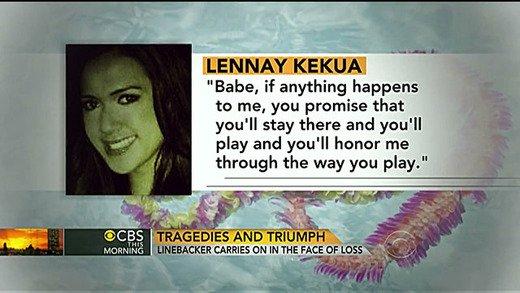 Yesterday I wrote about ABC News's shameful efforts to pass off old reporting as new. I mentioned that one of the formerly excellent news organization's latest habits is essentially retweeting celebrity statements without confirming their validity.

Today Deadspin.com reports on the reporting of the "death" of Lennay Kekua, girlfriend of Notre Dame's star linebacker, Manti Te'o. The often repeated story, according major press outlets, is Kekua died the same day Te'o's grandmother passed away. But there's a problem:

Who got it wrong? South Bend Tribune, ESPN, Sports Illustrated, New York Post, CBS News, College GameDay, The Associated Press (which reported on a city in California that doesn't exist), Los Angeles Times and The New York Times, according to Deadspin.

It's going to take some time to unravel the truth about who knew what when. Was it a hoax? Was there a cover up? Did Te'o lie or was he a victim?

In any event consider the impact social media is having here. Te'o apparently met Kekua on Twitter and the two were said to have a romantic relationship that fueled his performance on the field. In the best case, a man was duped into a relationship with a woman he met online. She didn't exist, and he and the nation mourned her passing. The press picks up the story and runs with it without ever checking the first of the Five Ws -- who.