Driving off the Fiscal Cliff

With hours to go until we fall off the fiscal cliff, here's an idea for congressional negotiators: Take the bus. 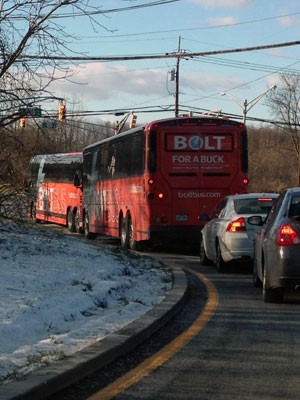 Congressional negotiators continue their fiscal cliff talks. In the last hour, ABC News reported the talks hit a "major setback." Republicans propose "chaining" social security benefits to a different measure of inflation, Democrats call it a "poison pill" because it would lower payouts to seniors. The problem is, President Obama supported it in the past. With less than two days left I'm getting the feeling Wile E. Coyote probably had anytime he climbed a mesa.

No doubt the federal government will in the end reduce spending. Here's an idea for congressional negotiators: Take the bus.

On the New Jersey Turnpike today I saw one of those MegaBus buses. They're the double-deckers that advertise rates as low as $1. I didn't believe I could go from New York to anywhere for a dollar. In fact I couldn't go anywhere worthwhile. New York to Washington costs $28.00, still a good deal. Then I saw a Bolt Bus. They charge $40 for the same trip. Then I passed a train station. Amtrak's price: $82.00. Well, they were an hour quicker. That's gotta count for something.

So has Amtrak's $1 billion per year federal subsidy, which makes the true cost of that New York to Washington trip $133.00 (each Amtrak ticket is subsidized to the tune of 51 bucks), according to Congress. And that microwaved hot dog you bought in the café car? Also a bad deal. A $2.00 can of Coke cost Amtrak $3.40 in 2011, according to Bloomberg. The railroad lost $840 million in the last 10 years on food sales alone. I didn't think that was possible. In a country in the midst of an obesity epidemic, who loses money on food?

I love trains and want to see Amtrak succeed, even thrive. But it might want to look to the Turnpike for ideas on how to make their bottom line improve. The Turnpike's operating revenue comes largely from tolls, EZ Pass, concessions and rentals. Not taxpayers.